A Picture in Time 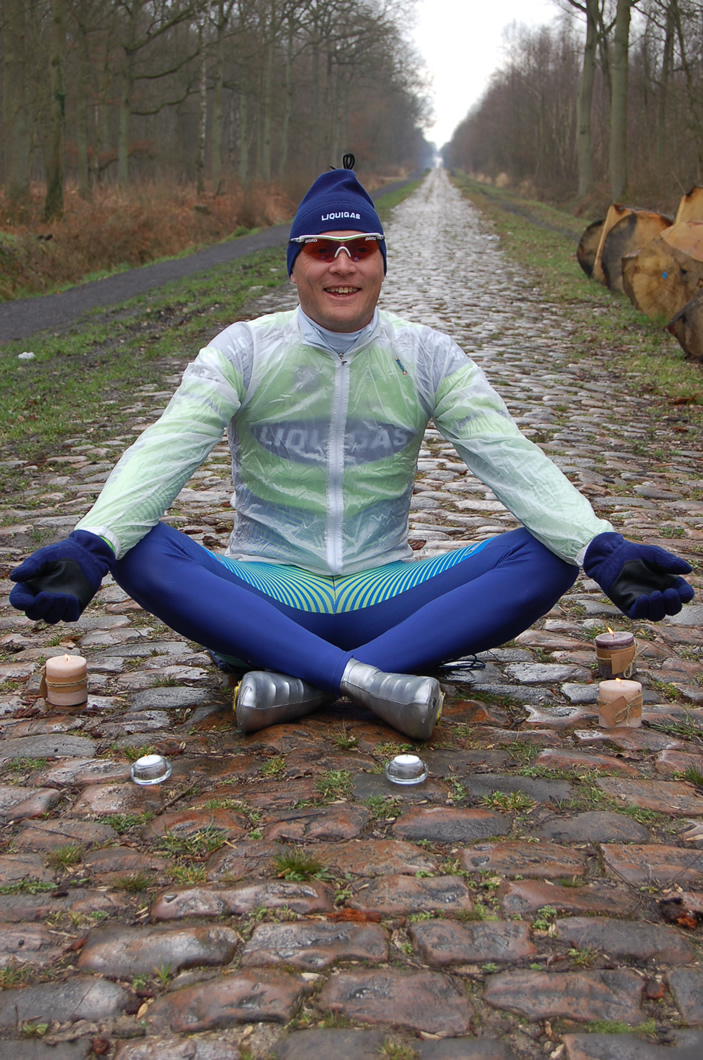 My photos aren’t up to Andy Jones’s professional standards, I apologize for that. Neither can I tell you what the camera settings were, I just run on automatic and hope for the best. This photo isn’t meant to be taken seriously either, it was just a bit of fun.

Magnus Backstedt won Paris-Roubaix in 2004, but in March 2007 he was trying to put a terrible two years of injuries behind him. While doing a proper photo-shoot for a story I did for Cycle Sport magazine, Magnus's manager and friend, Marty McCrossan thought it would be a laugh to take a photo of Magnus trying to appease the Gods of Arenberg, in an effort to put his bad luck behind him.

As ever Magnus was up for it. He was always fantastic to deal with, always amenable, always positive. His approach brought him and his team sponsors lots of positive publicity, and when you get down to it that’s a professional cyclist’s job.

Magnus was fit at the time, he was racing again, and the repair to his last injury, a shoulder that was almost ripped in half, was good. But was it Arenberg cobbles good? An important question for a winner of Paris-Roubaix who hoped to win again one day.

Backstedt thought there was only one way to find out, a test ride on the cobbles. So on a mad March morning we all rolled up at the Arenberg Forest, where some of the worst cobbles of Paris-Roubaix lie. He was going to give it a go.

We had a bunch of young Americans with us. They were racing in Belgium and wanted to see what the crux of a big cobbled classic was like. But while they set off riding down the cobbles, whooping and hollering, Backstedt withdrew and had a moment on his own.

He’d already warmed up, but now he stopped at the point where the race emerges from the Forest. He got off his bike and looked along the 2400 metres of stones, sniffing the air appreciatively, trying to feel the race-day buzz.

“Well, it’s no good putting it off," he suddenly broke his reverie. "There’s only one way to find out whether the shoulder’s fixed.” He got back on his bike and pedaled slowly down the cinder track at the side of the cobbles to the other end of the forest, the end where Paris-Roubaix hits the cobbles on race day.

Once there Backstedt continued for another 500 metres on the tarmac road, then he turned around, gathered himself and began to accelerate. Soon he was sprinting flat-out towards the entrance of Arenberg. He hit the stones as hard as he could, his bike hurtling forwards under more than 500 watts of power (he was using SRMs and we checked later). The stones fought back, Backstedt’s upper body juddered but his legs kept piling on the pressure.

In what seemed like no time he reached the other end, where the concentration ebbed from his face. He freewheeled to a halt, smiled and said; “Yep, that’s the shoulder fixed.” Then he rode back along the cinders and did it all over again another four times. After that he was well in the mood for more, so off we went to do the remaining cobbled sectors of the race.