“The Kemmelberg is a savage little climb made harder by the up and down effect of the hills before it, by the deadly Flemish roads and by the speed of the race. I loved it,” says Barry Hoban, the only British winner of Ghent-Wevelgem so far.

The Flanders plain rolls from Holland through Belgium to the foot of the Artois hills in France. Its flat black soil is crisscrossed by levied rivers with a horizon that stretches to forever, but one small part stands above the plain. Where West Flanders bashes into France the land is sculpted into a series of low hills, and within those hills lies the Kemmelberg.

The hills are called Heuvelland, which means hilly country in Flemish, and it’s a very pretty, very rural part of Belgium. Farming isn’t intense in Heuvelland as it is on the surrounding agro-industrial plain. Heuvelland is border country, a place of peace and harmony today where people flit between two countries without barrier or obstruction, a fact that belies its violent past. 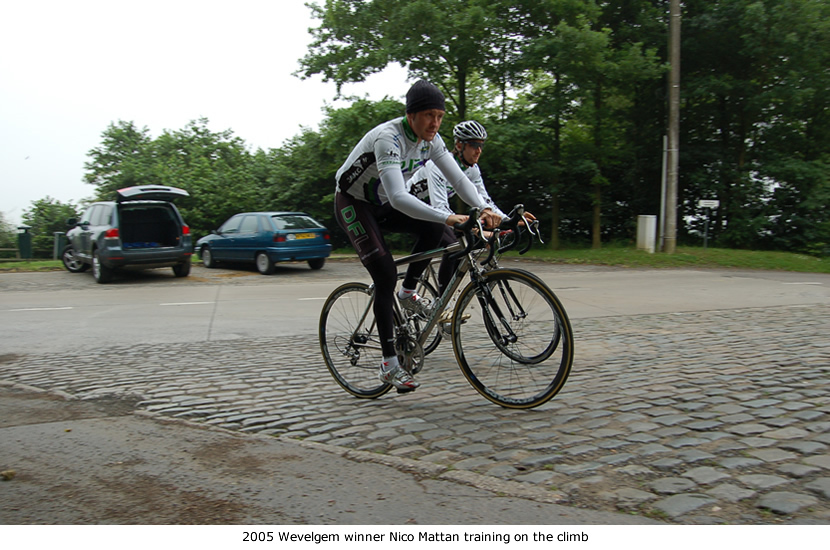 Kemmelberg is famous in cycling as the crucial climb in Ghent-Wevelgem, the place where any contender steps up or winning is just another dream. But 100 years ago the hill was a nightmare where 120,000 lives were lost. It was a key strategic point held by the allies for most of the First World War, but in the spring offensive of 1918 the German army attacked it. The allies held the hill at first, but later lost it with huge cost to both sides. So many died in the fight for the Kemmelberg that their memory cannot be set aside, and the hill is littered with reminders of their passing.

Making a classic
Ghent-Wevelgem first ran in 1934, a race for junior riders and went in an almost straight line south-west from Ghent to Kortrijk, where it entered Heuvelland, climbed a few of the hills, but not the Kemmelberg then headed for Wevelegem.

It turned professional in 1945, when it was won by Robert Van Enaeme, who had already won twice as a junior. The first pro race was 200 kilometres long and went through the Flemish Ardennes, climbing the Kwaremont and other hills more familiar to the Tour of Flanders. The route then clipped Heuvelland by including the Zwarteberg and Rodeberg just before the finish.

It was a tough course, but its character was borrowed from another race. Ghent-Wevelgem switched from a summer to a spring race in 1947, and the Kemmelberg was introduced in 1955. But the race only started looking like as it does now when it turned its back on the Flemish Ardennes.
Between 1957 and 1959 it linked with Het Volk to form the Flanders Trophy weekend, but the most significant change was in 1958 when it headed for the coast then did a circuit of Heuvelland, including the Kemmelberg, before the finish. By doing that Ghent-Wevelgem became a classic. It didn’t borrow hills from the Tour of Flanders, it had its own, and the Kemmelberg is the last.

The climb
There are three ways up the climb and Ghent-Wevelgem has used all three, but the eastern ascent from Kemmel village is the one used most often. It’s three kilometres long, if you include the drag up from the village. The first section is easy, dead straight and rises at between two and four percent. The surface isn’t bad either. It’s the final kilometre that’s tough, and it begins just before a sharp left-hand bend. The trees lining the hill start to crowd in from here, meaning the surface is often wet. This is where where the big decisions are made. 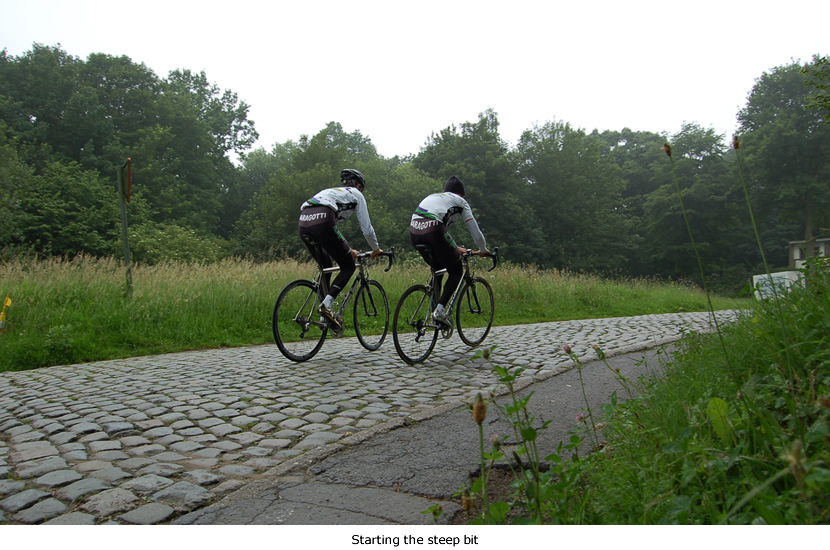 The gradient really bites, changing abruptly to eight percent for 300 metres, then it kicks up into double figures just before the shallow domed top. Strong men use this section to break the sprinters, and sprinters try to hang on. It’s a classic struggle, and Barry Hoban’s Ghent-Wevelgem victory in 1974 was a great example of it.

“The last time up the Kemmelberg was brutal. I was in the front group, confident of my chances, then Eddy Merckx went on the rampage. Riders were popping off the back all over the place, and the group began to disintegrate. I was hanging on, and I mean just hanging on. I was at my limit and I couldn’t have gone one tenth of a kilometre faster, but Merckx still piled it on.

“Then towards the top I heard my chain begin to chatter. We had friction gears in those days, and when you put maximum power down your legs could pull the chain off the biggest sprocket. I had to take my hand off the ‘bars to hold the gear lever down, and when I did I lost a few metres. The top couldn‘t come soon enough, but they still didn‘t slow down. The attacks continued right up to the finish,” Hoban says remnebring the day he hung on then out-sprinted Merckx, triple Tour of Flanders winner Eric Leman and Roger De Vlaeminck to win Ghent-Wevelgem. 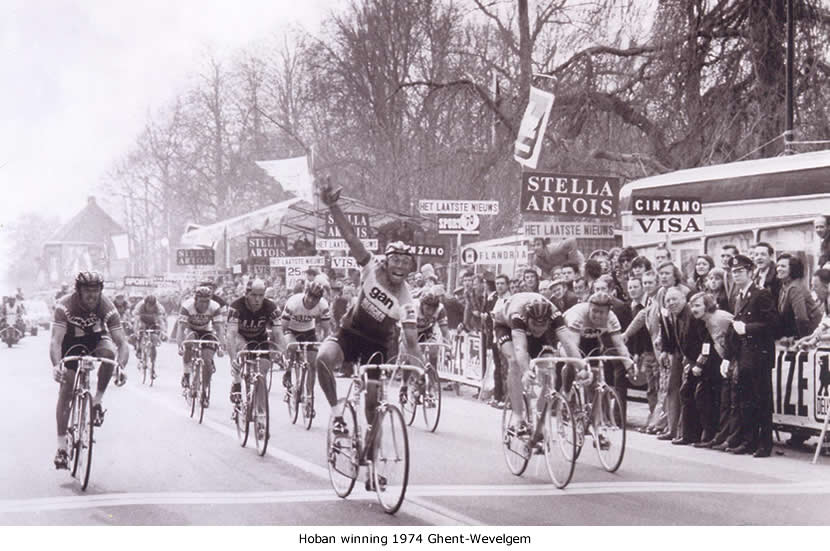 Going down
Selections were made going down the Kemmelberg as well going up. At over 20 percent the first part of the descent is steeper than any part of the eastern climb, and in wet conditions its slick cobbles were just as slippery as those on the ascent. A moment’s inattention, too heavy a touch on the brakes, a wrong-stepping spectator; they could all spell disaster. So many fell off going down in 2007 the descent was changed.

Instead of going straight down on the cobbles now, the race takes a longer route using a narrow strip of tarmac called the Klokhofweg, which joins the cobbled road further down near to the French Ossuary, a memorial on the site where 5000 unidentified soldiers are buried.

In 2010 Ghent-Wevelgem swapped its mid-week slot, sandwiched between the Tour of Flanders and Paris-Roubaix, to the last Sunday in March. It’s been a good move, the organisers have added a few more kilometres and a few more climbs. It's back near the race it was when Hoban won. But the Kemmelberg remains the key climb, the place to kill or be killed, where the strongest put the hammer down and the sprinters try to hang. Which will win this year, the strongest or the fastest? 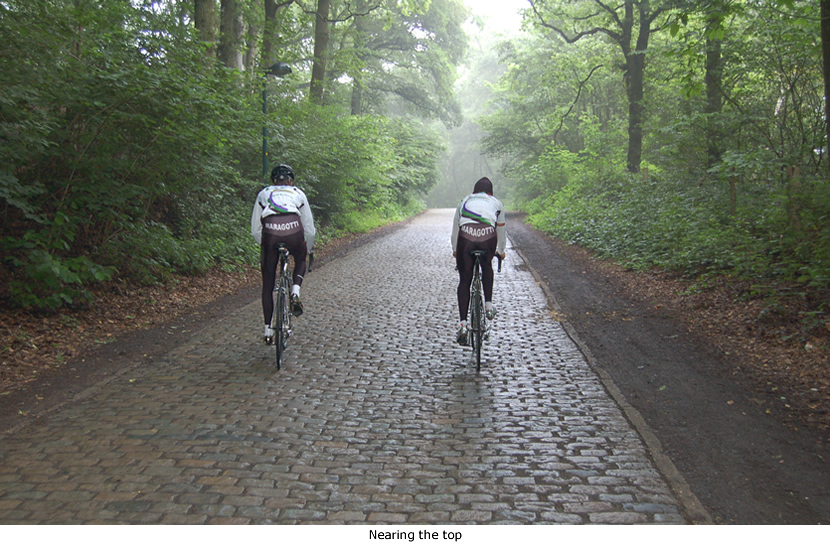 CL: You live close to the Kemmelberg, did you climb it often during your training rides?

NM: Never when I was a pro. Yes, maybe as a junior, but once you know a climb, and we raced over the Kemmelberg in many other races, like Three Days of De Panne, you don‘t need to train on it. I don’t think training on cobbled climbs makes much sense anyway, because the speed is much slower than in a race. It’s like a different place. You need to keep your mind empty about it until the race, I think.

CL: Being local, was Ghent-Wevelgem an important race for you to win?

NM: It’s the most important race in West Flanders, where I was born and where I still live, so yes. But I won other races I’m very proud of.

CL: What is the key to riding the climb successfully?

NM: Just consider it as one part of the race, and the golden rule in Belgian racing is to be near the front when the decisions are made. At the same time though you must save energy and try to stay calm. The key is reading a race properly. For example, if a headwind follows side winds you don’t need to be in the front echelon. The first circuit of the hills is important in Ghent-Wevelgem, the second more so, and the last time up the Kemmelberg is crucial. But you must still read the situation right. If you aren’t quite there coming off the Kemmelberg, don’t give up, instead look for opportunities. 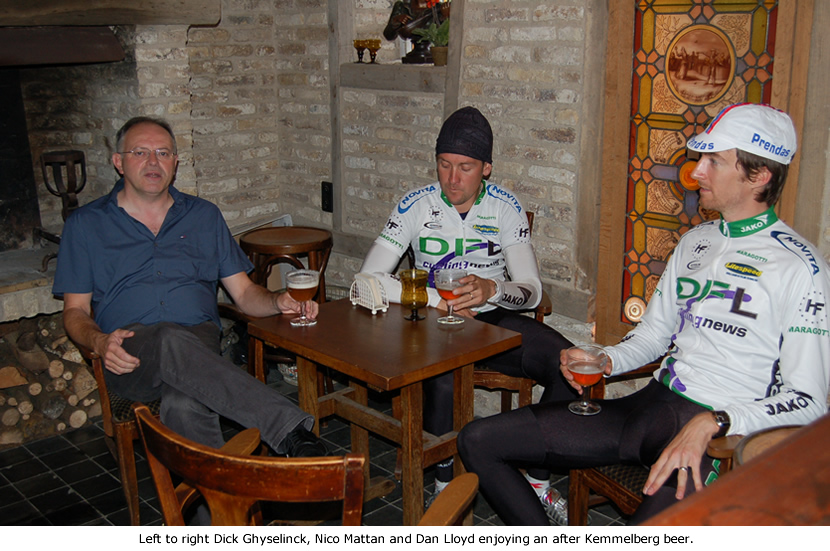 CL: What advice would you give anyone visiting the Kemmelberg?

NM: Take your bike, because the surrounding countryside is a great place to ride, and the Kemmelberg it is a good place to visit with a lot of interesting memorials, plus good eating at the restaurant on top. Also, my friend Dick Ghyselinck has a place nearby called In de Zon (www.indezon.be). He is an ex-bike racer and has many interesting pieces of cycling memorabilia in his bar. Plus he’s decorated part of it like the cafes were in Flanders 100 years ago, when they were shops, bars and barbers as well. So you could buy potatoes, have a beer and get your hair cut all at the same time. Very civilised eh?