There’s a folded ridge above the town of Oudenaarde where you can look across a timeless landscape of tall spires and medieval towers punctuating a patchwork of fields. This is the land of the Ronde van Vlaanderen, the Tour of Flanders, the race decided on over and around this ridge on the first Sunday of every April.

All the roads up it hurt, and they all affect the race; either adding to the build-up of fatigue, or enabling hammer blows that go down in history. From the 300 metre shock of the Molenberg to the dead straight Bosberg these steep cobbled hills are the beating heart of ‘Vlaanderen’s Mooiste’ the most beautiful race in Flanders.

They all have history but there's one, still one of the steepest in the race that had a surface so wicked it caused even the great Eddy Merckx to stumble and walk. The climb was even named after its surface, it’s called the Koppenberg, koppen being Flemish for heads, and the original surface looked like rows of skulls buried in the mud. It's changed now, the surface, although still cobbled, is smoother where once it was so rough it was declared unsafe for racing. 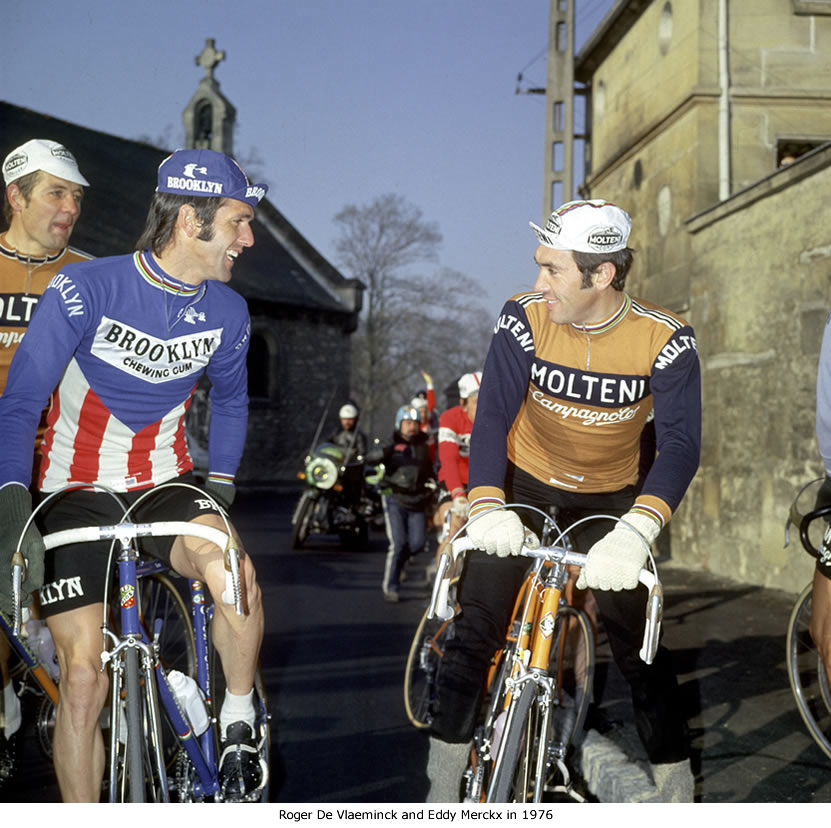 Cyclist walking
There is something wrong about a cyclist walking, it defies what cycling is, but the Koppenberg used to make cyclists walk every year in the Tour of Flanders. It still can, though not nearly as many or as often, but on the old surface nobody was immune. Even the greatest of all time.

The Koppenberg made its Tour of Flanders debut in 1976 and started as it meant to go on. “We looked at the hill before the race,” Eddy Merckx recalls. “You could see it was going to be tough, and there was a right and wrong way to ride it, but there was no point in practising a lot because once riders were on the Koppenberg it changed. Anything could happen, and it did in 1976. Riders were pushing and shoving, all fighting for the same piece of road. I was near the front, just a few in single file ahead of me when somebody squeezed past on my right, but there was no room for him to do it. He fell and he knocked me off my line, so I fell too.” 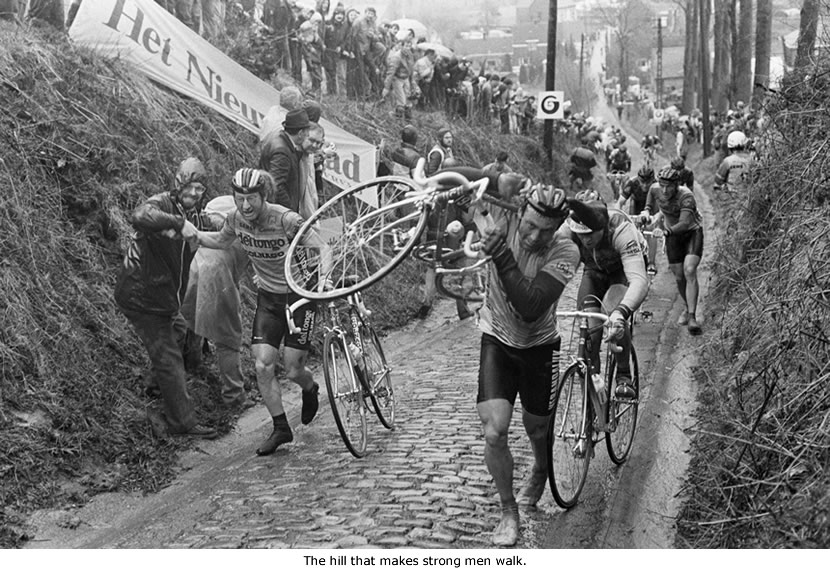 Ruined by rivalry
In fairness to Merckx his powers were waning by 1976. Prior to that he would have stormed up the Koppenberg leaving others to stumble and fall in his wake. Freddy Maertens, though, was hitting the height of his power. This Tour of Flanders was his to win, but he let what turned out to be his best ever chance of doing so get ruined by rivalry.

“Marc De Meyer and I dominated Flanders in 1976,” Maertens says. “We chose the Koppenberg to see if we could get rid of some favourites, and it worked perfectly. We were at the front and Marc attacked at the start of the climb. I followed the three riders who went after him, but behind me they panicked, and Merckx got caught up in that.

"I was already chasing when Merckx fell, and over the top I joined De Meyer at the front with Francesco Moser, Walter Planckaert and Roger De Vlaeminck. But De Vlaeminck was a man I didn’t get on with at that time, and I let him lose the race for me.”

As the five approached the finish De Vlaeminck knew he couldn’t win, Planckaert was faster and Maertens was a lot faster in a sprint. Super-fast in fact, later that year Maertens won eight stages and took the green jersey in the Tour de France. He also won seven stages in one Giro d’Italia and 13 in a single Vuelta, winning overall as well. Maertens was dynamite, but what happened next sounds comical. You had to understand what Belgian cycling was like back then.

Belgian riders won nearly everything during the first half of the 1970s, the egos involved were huge and rivalries intense. With three wins in Paris-Roubaix by 1976 De Vlaeminck was the new number one in cobbled classics, but Maertens was approaching his best. If De Vlaeminck couldn’t win the 1976 Ronde he didn’t want Maertens build on his reputation by winning either.

So at a crucial point De Vlaeminck let Walter Planckaert’s wheel go. There was a gap and Maertens, who’d been following De Vlaeminck, refused to close it. Planckaert looked behind him and couldn’t believe his luck when he saw two of his rivals drifting backwards. He started sprinting like he’d stolen something, taking the two still with him, De Meyer and Moser by surprise. Planckaert won with Moser second and De Meyer third. 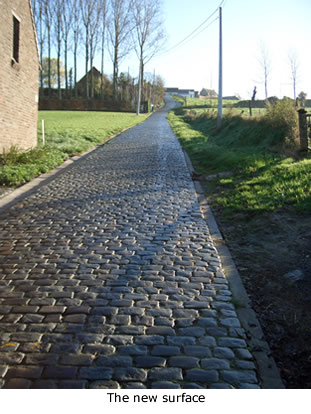 No run-up
Bike racing has changed now, daft rivalries like the one  between De Vlaeminck and Maertens have gone; well, mostly gone, but the Koppenberg has changed too. It’s still steep of course, a 600 metre wall of cobblestones, but the cobblestones are smoother and better laid now. The vicious camber that threw men into the gutter, the cracked gap-toothed centre, the random potholes and missing or upended cobbles; they’re all gone. They were replaced in 2001 by smooth stones laid in an orderly fashion.

There’s still no real run up to the Koppenberg. Out of Melden, the village at the foot of the climb, a 90 degree corner drops riders to a crawl. Then immediately after the corner the gradient slowly rises for 200 metres. After that it bites; 12 percent, 14, 16 and then over 20 percent all within the next 200 metres. The final section joins the road at the top like a ramp out of an underground car park.

“The best place to ride used to be the gutter, where the cobbles were just a bit flatter or there were stretches of concrete channel to ride in,” says Allan Peiper, a DS now with BMC Racing Team but once a hitter in Flanders with a career best of 7th in 1989.

“There was no line over the top of the cobbles, they were too broken. You could ride them, and sometimes you had to because the gutter was blocked, but it was harder. Since they re-surfaced it the Koppenberg is a little bit fairer. The camber isn’t so bad and the cobbles are quite uniform across the crown of the road,” Peiper continues. 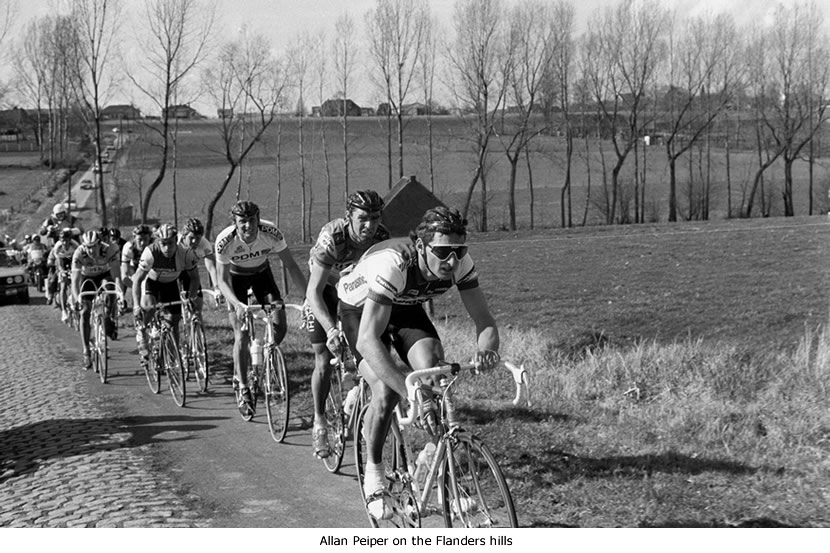 Less of a lottery
Re-surfacing changed the Koppenberg, made it less of a lottery. Before that, not riding in the gutters risked the cobbles steering the front wheel, desperate tyre slippage for the rear and the constant risk of pinch punctures in the pot-holes. Even today, if the stones are wet tip-toe application of power is required. Those behind the first 20 need to navigate like a guided missile to reach the top without being baulked, because not only do riders rely on their own skill and power on the Koppenberg, they hope those around them don’t run out of talent when they need it most. Slip and you are off, get baulked and you are off, stop and you are off. Once you stop the steep last bit becomes a trot for the still hopeful and strong, and a grim trudge for those more resigned to their fate.

The Koppenberg played a disproportionate part in the brutal selection that is the Tour of Flanders until 1987, when suggestions that it unfairly affected the race, and that the surface was downright dangerous were vindicated when the lone leader, the Dane Jesper Skibby fell and was all but run over by an official’s car.

The climb was taken out of the race and served 15 year in the wilderness before a new, 250,000 Euro surface of Italian stones was laid and the road-bed widened in 2001. The following year it returned. The Koppenberg is still as steep, still very hard, and it still reduces some high-flying pros to a shuffling walk, but its notoriety, and perhaps its iconicity, are firmly in the past. 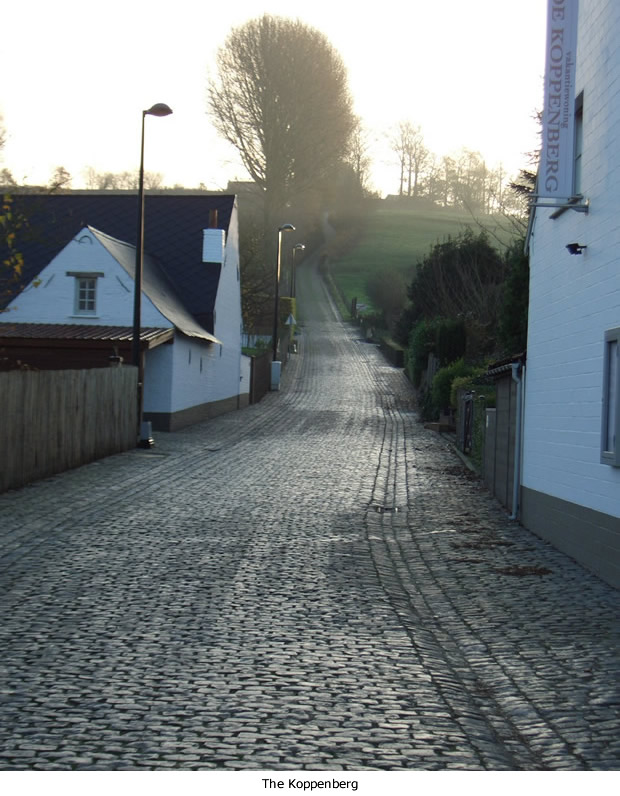