The first high pass ever used by the Tour de France

There’s a craggy notch between two of the highest peaks in the Pyrenees. The road slinks up one side then tiptoes down the other like a cat climbing over a roof. The wind moans through the gap. It’s a grey and gaunt place, often wet where not much grows. This is the top of the Col du Tourmalet and its fame is nearly as old and as great as the Tour de France. 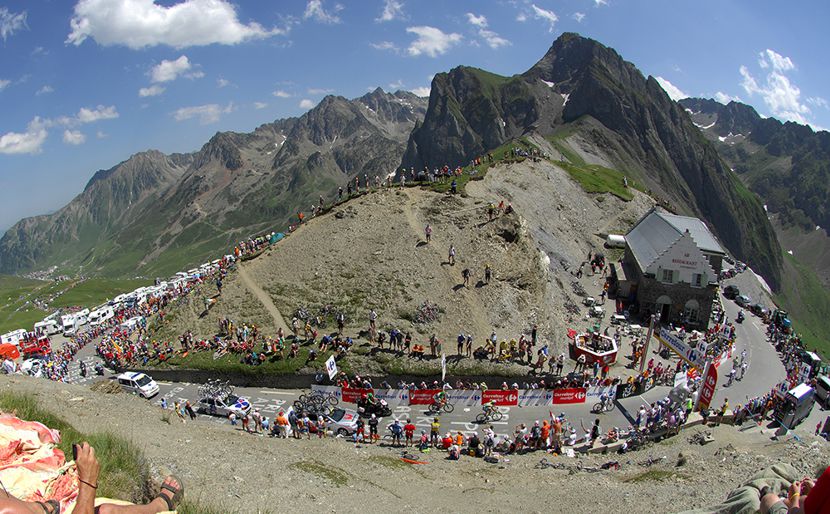 There’s nothing engineered about the road over the Tourmalet, it uses natural lines to gain and lose height and. A lush pastoral start lulls the unwary into ambitions they can ill afford, because later the way up is steep and unrelenting. Long straights and booming waterfalls cower the spirit. The top is a stark place where rock ribs show through the thin soil.

The road runs east to west, and the different sides are fairly equally split in Tour de France history. If a stage goes west the riders climb from St-Marie-de-Campan. Go east and the Tourmalet starts in Luz-St-Sauveur. Average gradients are virtually the same on both sides, but the west is a little bit longer and the east has a slightly higher maximum gradient, it also has just a bit more history.

It was the east side the riders climbed in 1910, first time the Tour de France visited the Tourmalet, the first time it crossed the 2000 metre contour. The stage ran 326 kilometres from Luchon to Bayonne and went over the Peyresourde, Aspin, Tourmalet and Aubisque. The Tour had visited the Vosges and flirted with the Alps, and the previous stage saw the riders cross some of the lower Pyrenean climbs, but this was uncharted territory, off the scale. Tour founder Henri Desgrange had not even seen the high Pyrenees until the day before the stage, and what he saw then really worried him.
The landscape is wild now but was much wilder then. Bears and wolves roamed the high Pyrenees, the road surfaces were awful, and bikes weren’t suitable for riding up steep gradients for such a long time, but most of the riders made it through. They rode where they could, got off and pushed where they couldn’t. At one point Octave Lapize shouted “Murderer” at the waiting organisers, then pressed on to win the stage at an average speed of 23 kilometres per hour.  Forty riders made it to Bayonne; albeit the last, Georges Cauvry was seven hours behind Lapize. Desgrange was delighted, he always wanted the Tour de France to be the hardest race on the planet, and now it was. 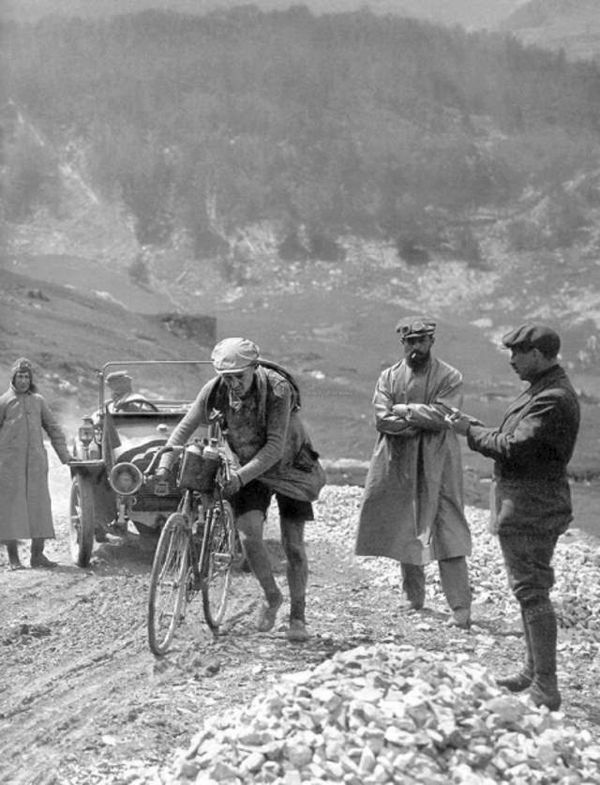 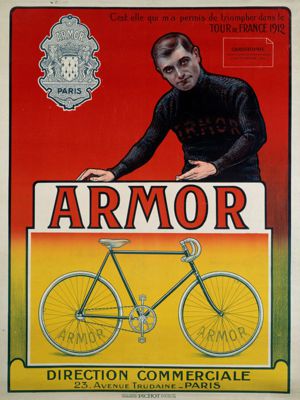 The eastern ascent of the Tourmalet starts in the slate-roofed village of Ste-Marie-de-Campan, where balconies and windows are littered with life-sized stuffed dolls, a tradition said to ward off evil spirits. The Tour is celebrated here with a plaque that records the day in 1913 when Tour rider Eugène Christophe spent four hours in the village forge mending his broken forks.

The first three kilometres of the climb are easy, just a gentle slope, but things change in the aptly named settlement of Gripp. The road steepens, and in one kilometre it passes eight per cent then stays above that mark for the next 12 kilometres to the top. This is the tough crux of the Tourmalet's east side.

At first the road thrusts directly up the narrow valley of a watercourse called Adour de Gripp. Then after a sweeping left-hand bend it enters a forest of tall pines, where for a while nothing is heard but the muffled rush of a deep waterfall. There are several stretches of nine percent climbing through the forest, but the hardest part is to come. The road joins the Adour du Tourmalet, forging upwards at against the flow of the tumbling stream at over 11 percent, then it goes through several avalanche protection tunnels to a ski resort called La Mongie.

Some tough climbing has been done, but according to the 1988 King of the Mountains Steven Rooks, La Mongie is where it really gets bad in a race. “The small climbers love the Tourmalet because it so steep all the way, but sometimes even they wait for La Mongie before attacking. After that it keeps on being really hard. For me it was a climb I had to ride conservatively. I had to see what the others did, then try to answer.” 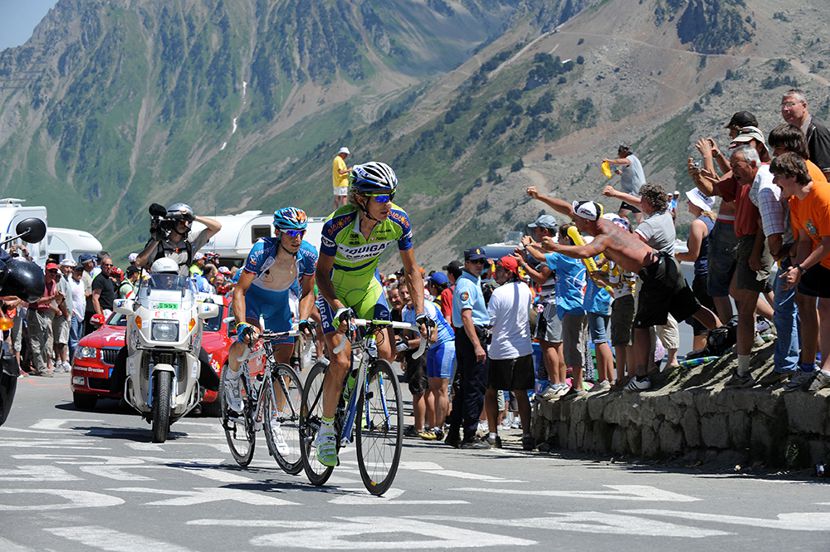 Ski lifts radiate from La Mongie, but the road spears straight up towards the summit bends. The scenery opens out, the green fields and woods of the lower slopes give way to frowning crags and undernourished grass. This is an uncomfortable place, hot or cold it’s an ordeal. The top section is wide, bare and often scoured by wind. It feels more Andes than Pyrenees, and to support that image a large flock of llamas live above La Mongie.

Bad detour
Tourmalet means bad detour in the local Gascon influenced dialect. The Tourmalet pass was first used centuries ago to get between the upper Adour valley and the Gorge de Luz when roads further downstream were flooded. There was nowhere else for the road to go than through this narrow inhospitable gap, because the higher parts of the two valleys are separated by huge mountains.
One of the first recorded journeys over the Tourmalet was made by a noble woman, Madame de Maintenon in 1675, who was carried over the Tourmalet on a Sedan chair by several porters for her to take the waters in Barèges on the western side of the pass. But it’s cyclists who have made the Tourmalet famous, and in turn it has made a lasting impression on some of their hearts. 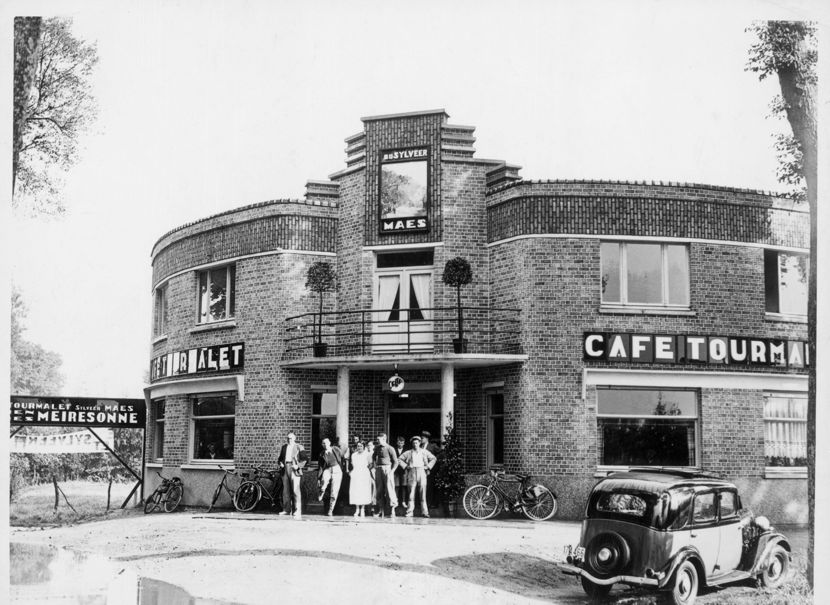 Sylvère Maes was first over the Tourmalet in 1935 and 1936. He won the Tour de France in 1936 and 1939 and invested the money he made in a café built on the main crossroads in his home village of Gistel in West Flanders, where Johan Museeuw also comes form. Maes called it Café Tourmalet and it’s still there today. Last time I was it was an Irish bar called O’Tourmalet.

Federico Bahamontes enjoyed his first conquest of the Tourmalet so much in 1954 that he stopped to eat an ice cream at the summit café. “I wanted to wait for the others because I was unsure of the descent and I needed a guide,” he explained later. In subsequent years he led the Tour over this climb another four times, a record for the race. 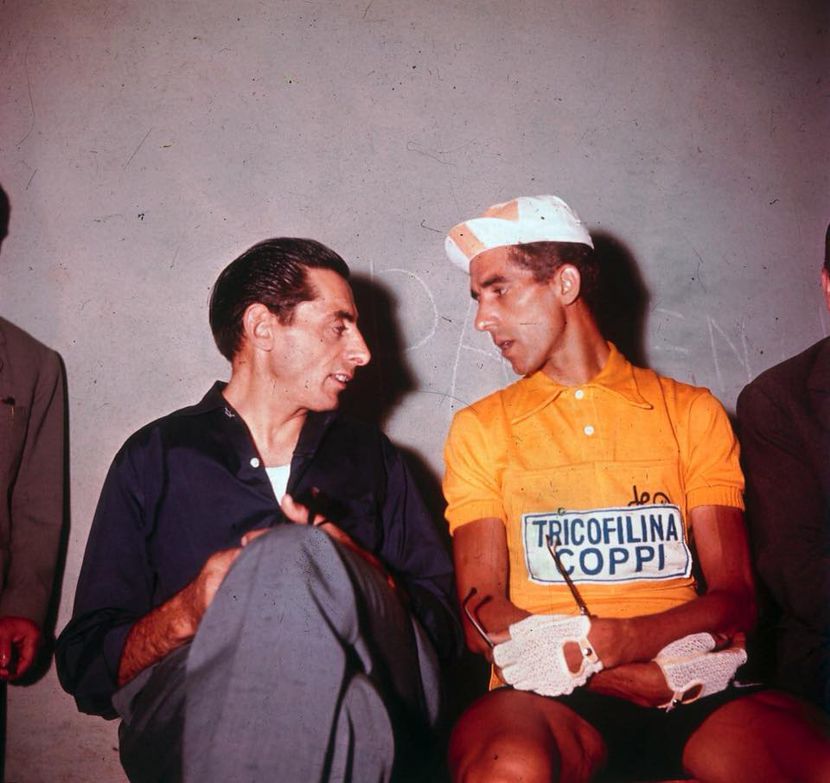 Just behind him Belgium’s Lucien Van Impe was first across the Tourmalet three times, he explains why climbers like it so much. “It really suited me. It’s too steep for power climbers, especially from just before La Mongie to the top, which is why true climbers like me like the Tourmalet. A true climber can use it to gain a lot of time,” he says. 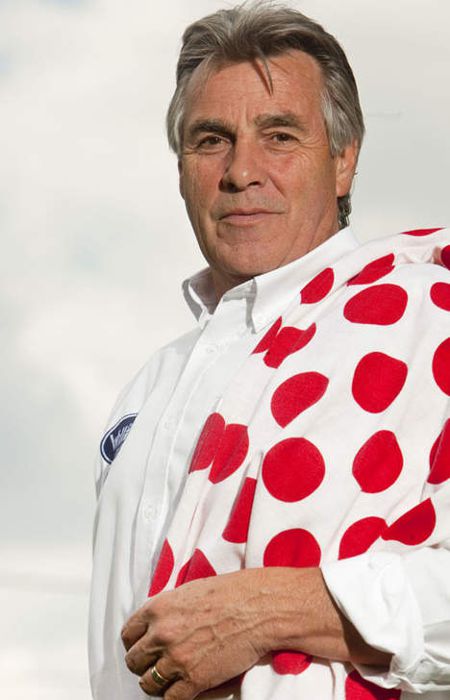 So that was the essence of the Col du Tourmalet; less so now but it was a true climber’s climb, a tough unremitting slog with nowhere to hide but plenty to win and lose. On its summit there is a huge sculpture. It’s called the Giant of the Tourmalet and it soars above the road and above a memorial stone to one of the Tour’s old directors, Jacques Goddet. The sculpture is a polished steel representation of a cyclist riding ‘en danseuse’ out of the saddle. It looks resolutely upwards, caring nothing about what is behind; the spirit of a true climber in a true climber’s spiritual place. 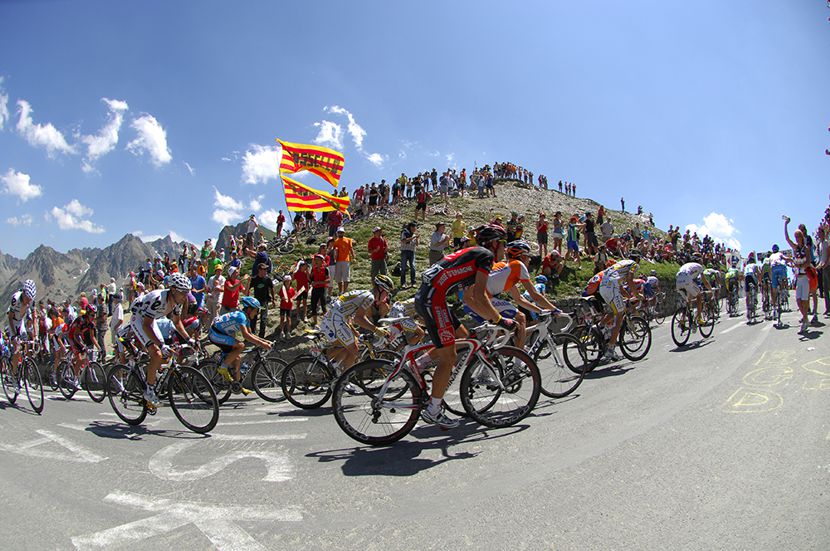