A Milestone on the Muur


The directeur sportif of Bianchi-Dama, David Walters tells the story of the team’s recent participation in the Lotto Tour of Belgium.

Words: David Walters
In 2015 four young women joined a fledgling cycling team, and in September 2018 that team took part in one of the most prestigious races in the world, the Lotto Tour of Belgium. They acquitted themselves well, just as they always have in the three short years since those riders made a leap of faith to join the team, right at the start of its journey.

The team for Belgium was Alex Sheehan, Georgie Panchaud, Emma Cockcroft, Bethany Taylor and Tasha Reddy. Me as DS, Caroline Stewart was mechanic, and the race was categorised as UCI 2.1 with stages at Nieuwpoort, Moorslede, Herselt and Geraardsbergen. 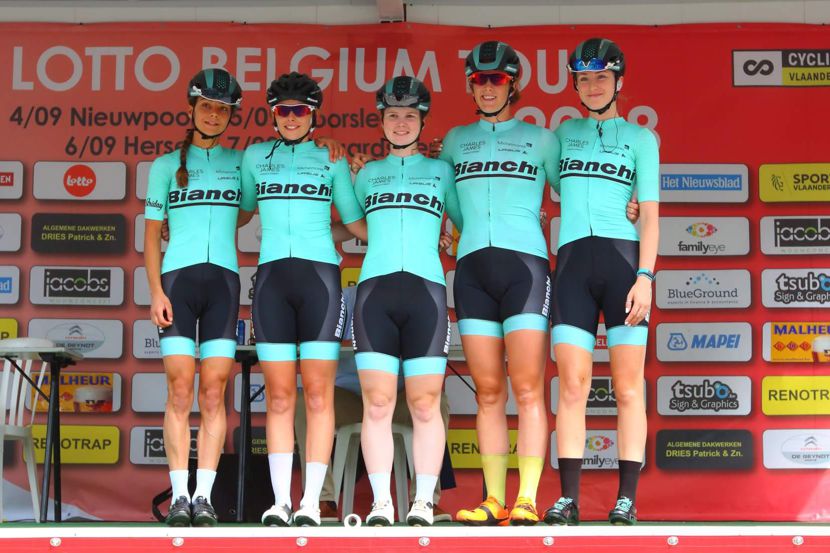 Photo: Kurt Lowie
Driving into Geraardsbergen on the morning of day four of the Lotto Tour of Belgium, with the race due to climb the legendary Muur van Geraardsbergen, there was no dread at the prospect, it felt right. We didn’t feel like outsiders, we felt like we were there on merit and accepted.

We’d come a long way in the three previous days, and an awful long way from where we started in the South-West road race series. But when Emma Cockcroft won that series in 2015, with able support from her teammates, it was obvious the team had an exciting future. The day of the Muur, would show how far we’ve come together, and the huge amount we’ve grown and learned about bike racing along the way.

The objective going in to the Tour of Belgium was experience. It was the biggest race the team has done by far, so everything else was secondary, so long as we took everything we could from the experience, and so long as we raced as well as we could. 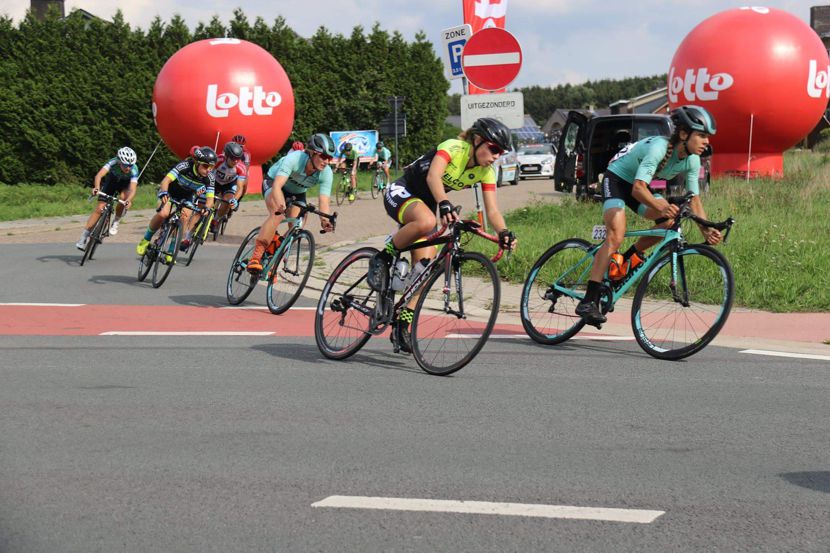 The stage started on the Muur in bright sunshine, with a big loop north of Geraardsbergen, then three local circuits, then up the whole length of the Muur, over the Kapelmuur to finish back on the Muur itself. Enough of a big deal, but look at the professional teams we lined-up against. Movistar, Waow Deals, Wiggle-High5, local favourites the Belgian Lotto-Soudal team, plus national teams from Norway and Germany. All of them really wanted this stage, and the Tour of Belgium on their palmares.

But not only was the level of competition, the race parcours, always special in Belgium, the race organization and the professionalism of the other teams new to us, it was the first time any of us had used to use race radios. Although they turned out to be essential.

When Emma’s chain jumped on a speed hump and twisted, a rare occurrence, the only option to get her back into the race was a quick bike swap and subsequent chase through the 24 team cars. This was done expertly and calmly, another test for all concerned. The chain issue was then corrected on Emma's original bike while we drove on, another first. All the time I was in radio contact with Tasha, who relayed information to Emma. All in all a great team effort allowed us to get Emma back on her original bike for the run-in to Geraardsbergen and the Muur.

It may sound like a small operation, and something that just happens in bike racing; well, yes and no. Radios aren’t allowed in the vast majority of UK races, and in big race like the Tour of Belgium just getting to a rider in a suitable spot with minimum fuss, and with clear communications, is tricky because of the route and the big race convoy. And we were doing it all for the first time.

That we did it is testament to all involved, and as our race programme evolves, and our sights get set higher, all the riders have acquitted themselves so well. The way we develop into a complete team unit is a pleasure to witness. And as we grow as a group, they grow as individual riders.

The cobbled climb through the marketplace, up the Muur, Kapelmuur, the rapid descent off the top, up the Bosberg and back around 3 times, all part of a day’s racing, say it quickly and it rolls-off, all part of forming quite the experience for us all and rounding off a huge week for the team. 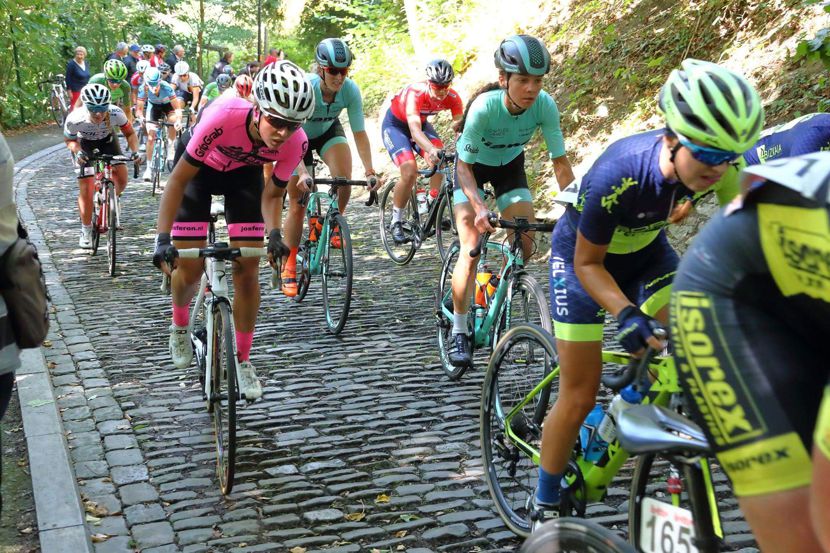 Looking back now at the end of the season things seem to come and go in a blur, it’s only when we reflect on the past few weeks and years, can we see the significance in what we’ve done as a group, culminating in the Tour of Belgium.

Some things stand-out, though. One is how much love there is for the most historic of historic bicycle brands in Bianchi. We feel honoured and are very proud to carry the celeste colours, but to have locals who are used to bike racing all around them week in week out, seek us out and still say how good it is to see us and Bianchi at their race, that’s something to remember and creates a very special feeling.

Alongside this, our riders; each one of them far from full-time bike racers, taking on some of the very best professional teams in the world with such poise and good grace, it was wonderful to see and to be part of. We may have expanded from the original four riders to nine now, but the spirit and character of the squad doesn’t alter.

Which brings us full circle back to 2015, and how rocking-up to our first regional events and doing our thing, much as we do now, doesn’t seem so different after all, it’s the surroundings and company we keep that have changed.

Reflecting on one event as a microcosm of a project never gives a full picture, that’s obvious. However, there is something quite special to end this latest chapter of the Bianchi Dama story in Geraardsbergen, and to dwell for a moment on what an exceptional group of riders and supporters we have. When we started-out there was a vision of how it could pan-out, and what has come to pass, with the people places and events involved, makes me and the team feel very lucky indeed. It’s quite a thing. 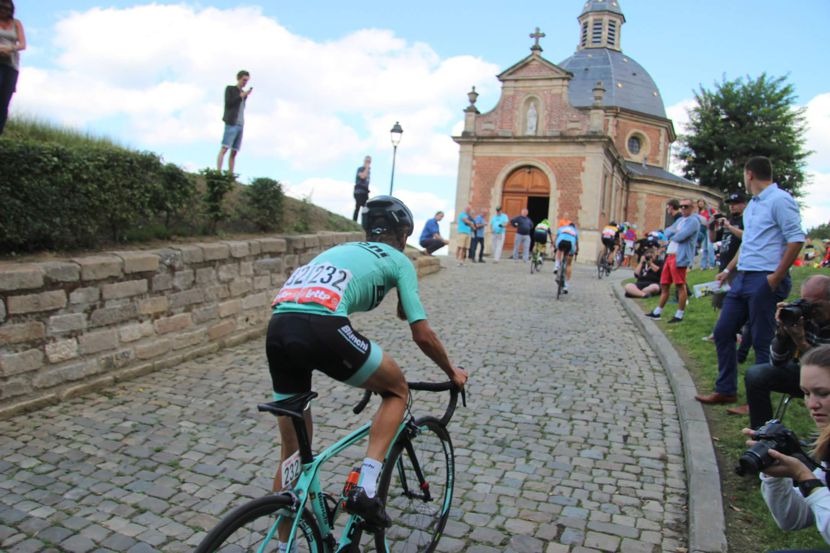