In 1967 Tom Simpson and Eddy Merckx were team-mates. Simpson was the established star, Merckx the man in waiting, only they both wanted to win Paris-Nice. This is what happened. 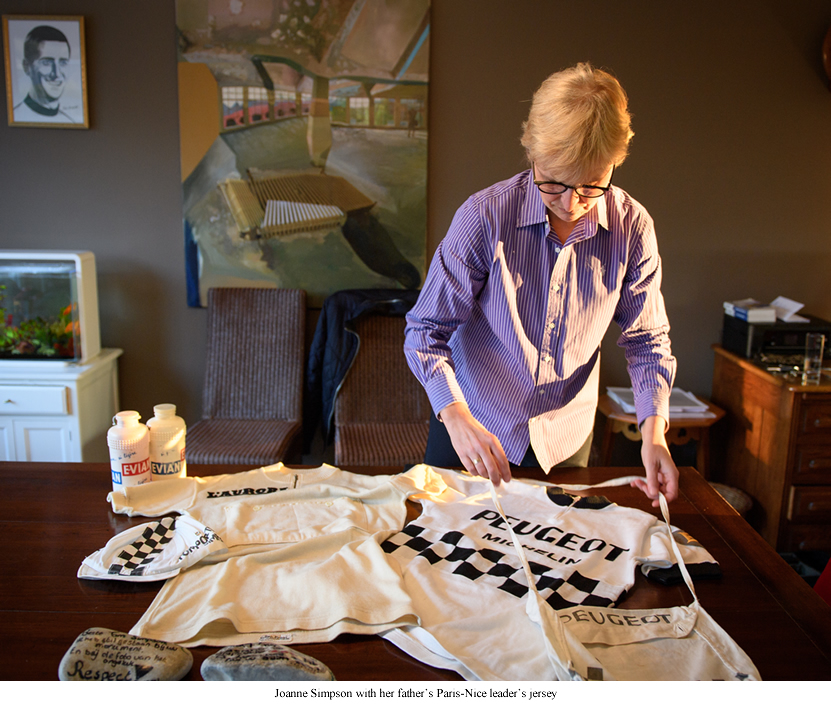 The 1960s Belgian equivalent of Mark Cavendish, an explosive bundle of muscle called Guido Reybroeck, won the first two stages of Paris-Nice. The first ended in a bunch sprint, but there was a split on the second stage. Eddy Merckx was in the front half and he took the leader’s jersey, which was white before ASO bought Paris-Nice from Laurent Fignon in 2001, and slowly changed it to yellow.

The British pioneer cycling journalist JB Wadley spoke to Simpson after stage two in St Etienne, where Tom revealed a dilema.
“I’ve based my whole early season on winning Paris-Nice, and now my own team mate Merckx is leading. What do you do in a case like that?” Simpson asked Wadley.

“That’s a difficult one Tom,” Wadley replied. “But there are five days to go.”

Stage four was the first really difficult one, with attacks coming on the first climb, the Col du Grand Bois. A group formed close to the top and sped away. Simpson was in it, but Merckx wasn’t. Simpson didn’t work, and their team, Peugeot-BP chased like mad for Merckx, but the 14-man break gained nearly 20 minutes by the end. Rik Van Looy won, Walter Godefroot was second and Simpson was third. Rolf Wolfshohl took over the race lead, with Simpson in second place.

Merckx was livid. He told journalists he’d been double crossed by Simpson. Next day Tom told JB Wadley that Merckx refused to speak to him that night, but he pointed out that the break was too good to miss, and if he hadn’t gone with it then no Peugeot rider would have won Paris-Nice.

The next stage was flat, setting up the scenario where Simpson had to use the Mont Faron stage to get ahead of Wolfshohl, then do a good final time trial to hold him off. It would be difficult, Wolfshohl’s team, Bic was very strong, with the likes of 1966 Tour de France winner Lucien Aimar and the superstar Jacques Anquetil in its ranks. Could Simpson depend on Merckx for help? 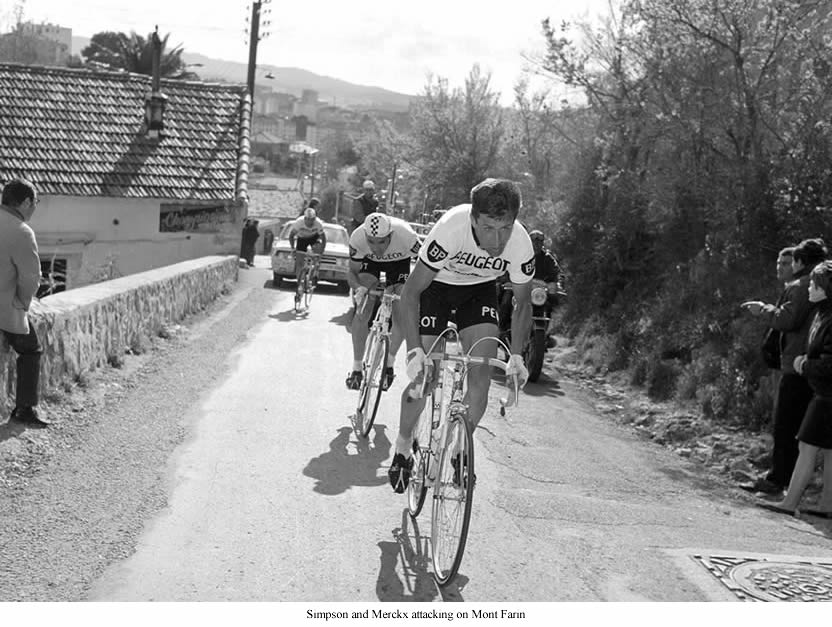 The night before Mont Faron somebody must have brokered a peace between Simpson and Merckx, or they talked it out for themselves. They were friends anyway, and Merckx has always paid tribute to Simpson’s encouragement when he joined Peugeot-BP in 1966. “The atmosphere at Peugeot was totally different to my first team, Solo-Superia, where Rik Van Looy was the established leader. All I got from Van Looy and his cronies was ridicule, not one piece of help or advice. They were very unfair, I was still just a naïve young boy really. With Peugeot, and especially with Tom, it was completely different,” Merckx said during an extensive interview I did with him a few years ago.

Merckx and Simpson came out united on the Mont Faron stage. Merckx attacked shortly before the climb that towers over the port of Toulon, and Simpson jumped across to him. The race split to pieces behind them. Aimar and Wolfshohl led the rest but they made no impression. This was Simpson’s chance, and a couple of times he distanced Merckx on the climb but he waited, he needed the Belgian’s help on the remaining 20 kilometres of flat roads after the big climb.

They shared the lead all way to the finish, where Merckx took the stage and Simpson the race lead by 1 minute 26 seconds from Wolfshohl. It had been a hell of a day, with the field spread over more than half an hour.

There was two days to go. Simpson defended masterfully, under fire from all quarters as the teams of Wolfshohl and another rider close in the overall, Bernard Guyot launched serious attacks. The 100 miles between Antibes and Nice became a torrid struggle, but at the end  of it Simpson still led, with just the time trial to go.


He could lose no more than 1 minute and 25 seconds to Wolfshohl, and 2 minutes to Guyot to ensure overall victory. In the end Simpson did a fantastic ride, taking second place in the time trial two seconds behind Guyot, who later that year admitted he’d tucked in behind his team car for some of his ride.

Simpson beat Felice Gimondi, Merckx, Ferdi Bracke, Raymond Poulidor and Anquetil in the time trial, which was a big boost for his Tour de France ambitious that year. The Peugeot riders celebrated well that night. “I first learned to celebrate after a victory from Tom,” Merckx says. “Tom loved to win and loved to celebrate. There is joy in victory, it is only natural to celebrate. But I also learned in that Paris-Nice that Tom was a very good rider. He really put me in my place, after I thought that I was on the way to winning it.” 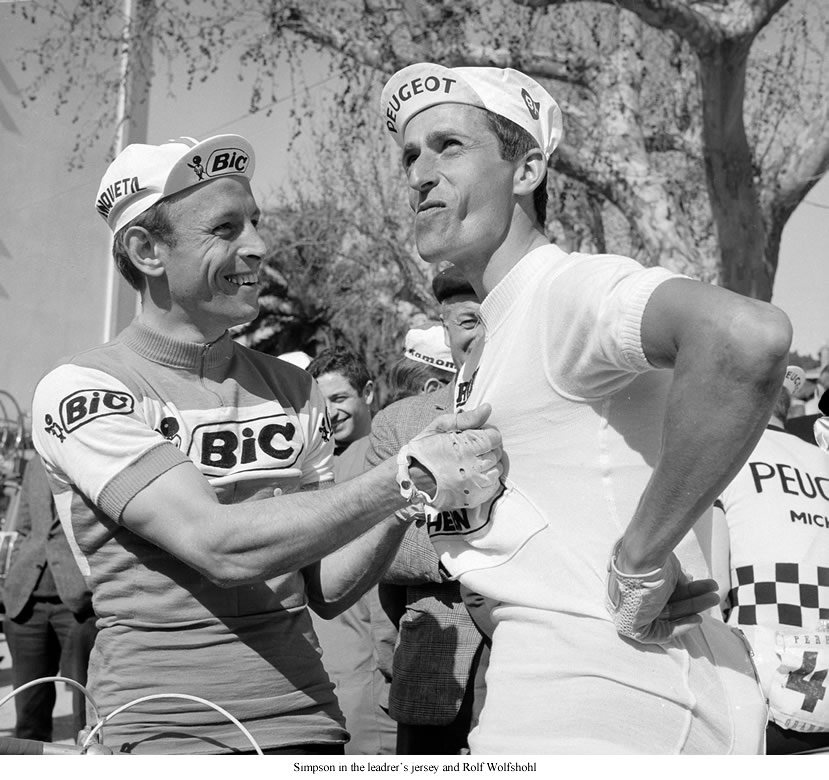