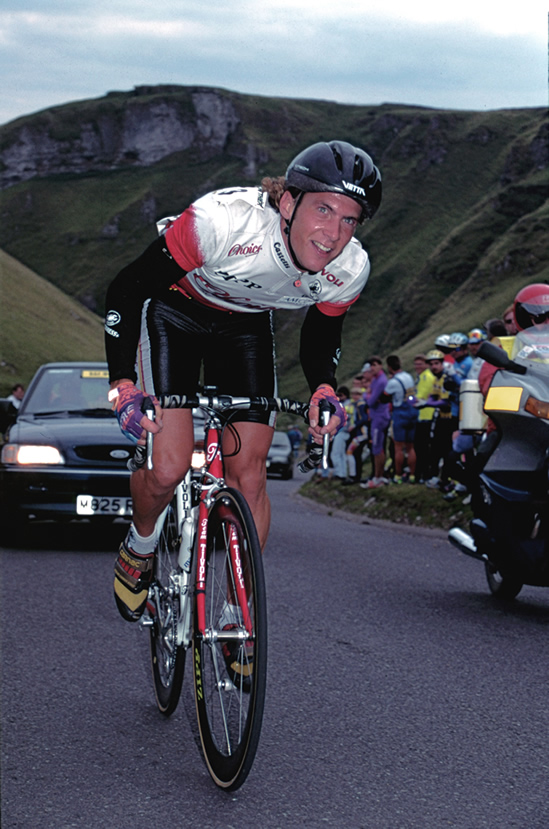 A Picture in Time

Words and Photo by: Andy Jones

It is 24 years since I took this shot, at least it will be in September this year. It features Simeon Hempsall, a local rider from Sheffield riding for the Choice Accountancy Cycling Team, taking an impressive win at the 1994 Lowther Tour of the Peak.

Considered a classic race in the British cycling calendar, the first Tour of the Peak was won by Ernie Clements way back in 1943. Its route evolved into two laps of a near 45-mile circuit that included the climbs of Snake Pass, Mam Tor and Chinley Head. But when the road over Mam Tor was destroyed by a massive land-slip in 1979, the course changed, using a string of replacement hills including this one, the super-steep Winnats Pass.

Some hills need qualifying by their numbers, but not Winnats Pass. It’s back-breaking, it’s long, 1000 metres or thereabouts, it's always windy and the wind is always head on. Winnats is short for Windy Gates. Approach Winnats from the Hope Valley, as the Tour of the Peak did, and it’s a gash in the bright green plateau ahead. Only when you get closer is the improbably angled ribbon of tarmac revealed.

Geologists thought Winnats Pass was a collapsed cavern. There are other caverns nearby, all created by water dissolving limestone, and it was presumed that the roof of this one just fell in. The new theory is rather more exotic. Winnats was formed from a fissure in the original coral reef that turned into limestone. You can see fragments of the original coral in a huge block of limestone near the top of Winnats called Windy Knoll. Erosion, particularly during
the Ice Age, widened the fissure to create the gorge we see today. Or so the theory goes.

Hempsall had attacked along the Hope Valley and was well clear when he reached me on Winnats Pass. He eventually won by over four minutes from Jeff Wright, a formidable climber from the north-east and British hill climb champion two years before. Winnats was a venue for that race too, although not when Wright won, ten times from 1947 to 1977, but after that the difficulty of closing the road for such an event prevented more national titles being held there.

Winning magazine used this picture for its October issue, in the race review round-up section. It was taken on Fuji Provia transparency film using a Nikon F801s, 35mm-135mm zoom (set at 65 or 70mm) with flash at 1/250th sec, and remains one of my favourite pictures from those times.

Sadly, the Tour of the Peak is no longer part of the UK domestic calendar. Mark Lovatt was the man of the Peaks winning six times in a row from 1998 to 2003. The last Tour of the Peak was won by Paul Manning in 2005, Lovatt was second. Simeon Hempsall is now an osteopath who practices at two facilities, one in Chesterfield and the other in Sheffield.
.