Barry Hoban turned professional in 1964 for Mercier-BP, one of the biggest teams in France. He moved from Wakefield in 1962 to live in northern France, racing as an amateur then an independent (semi-pro) and winning plenty of races.

He started his pro career fit and raring to go. He was picked by Mercier-BP for Paris-Nice, where he finished fourth in the time trial, beating no less than Jacques Anquetil. The team was so delighted Hoban was entered for every race going, including all the cobbled classics. He only didn’t do the Ardennes classics that year because Mercier put him in his first Grand Tour, the Vuelta a España, which started at the end of April in 1964. It moved to its current slot in 1995.

Hoban (left) and Tom Simpson (right) in 1964
In the following adapted extract from Barry Hoban’s autobiography, Vas-y Barry, published by Cycling Legends, he recounts his first Grand Tour. He did well in it, becoming the first British rider ever to win a stage in the Vuelta. It was two stages consecutively, but in this extract Hoban talks more about Spain, which in 1964 was still ruled by the fascist dictatorship of General Francisco Franco. It was at the beginning of a boom, the ‘Spanish Miracle’, but its effects hadn’t reached the countryside where the race went, and had only just hit the coast.

So, from ‘Vas-y Barry, My Cycling Story’ by Barry Hoban……………
You didn’t get told by phone if you were picked for a certain race, you were told in a letter. In the 1960s and 70s, Mercier riders would receive a letter from Mme Catherine, PA to Antonin Magne then later to Louis Caput (both Mercier team managers- Ed).

It would say “Dear Mr Hoban, you have been selected to ride in the Tour of Spain. The start will be in Benidorm. We will be staying at the hotel ……….” whatever it was. “Rendezvous at 16.00 hours on this date ….” whatever date they wanted you there. “You will be reimbursed second class rail fare as expenses.”

Riders just jump on a plane now, fly to the nearest airport and are picked up in a Limo. Well, not a Limo, but by a team car or one of those great luxury buses they have now. We didn’t get any of that. We went by road or rail, and if it was a long way it was by rail.

We took our race bikes with us too. They weren’t carried around in trucks to be waiting, all primped and prepared when you got there. French railways were supposed to weigh the bikes, although they just let us wheel them on and classed them all as being eleven kilos, which was about right.

Anyway, as the letter said the 1964 Tour of Spain, the Vuelta everybody calls it now, started in Benidorm. It took several train changes to get there, but what a difference Benidorm was then to what it is now. There was just a fishing village and the bay, which now has rows and rows of high-rise hotels. There was nothing like that then, they’d just put one road on the front ready to start building the modern resort. 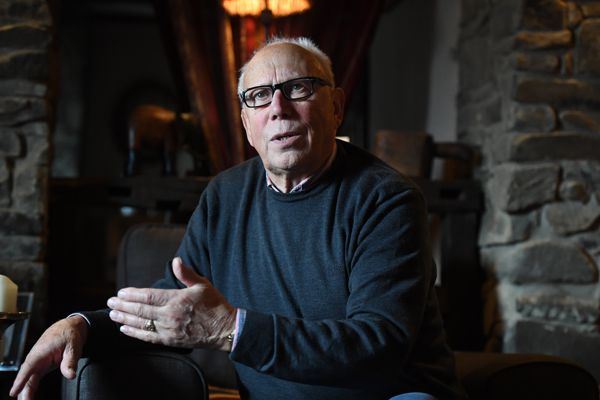 I think the hotel we stayed at in Benidorm village was three or four storeys high, and that was the biggest building there, although they were building bigger ones. You should have seen the scaffolding they used though. Spanish builders couldn’t get hold of steel, they built their scaffolding from wood, and it wobbled like mad when the guys moved around on it.

The first stage was a split one, a 42-kilometre criterium and an 11-kilometre time trial, both on the one and only road in Benidorm. It was a promotional event really. They had plans for Benidorm, so having the first stage there was the beginning of that, but there wasn’t even a proper road into and out of town.

It was my first Grand Tour, which is enough to take on, but Spain was so different in 1964. General Franco was still in power, the country was still run by a military dictatorship, and the thing that made a big impression on me was it was full of policemen and priests.

You’d go mile after mile in the Vuelta back then and the road was lined with policemen either side. If any of the crowd tried to push through they just took their batons out and whacked them back into place.

Anyway, I got to Benidorm and we started the Vuelta, and it was a good one for us because Poulidor won. I won a stage, my first professional win. Then blow me I went and won another stage next day, which would become a bit of habit, I did it twice in the Tour de France. 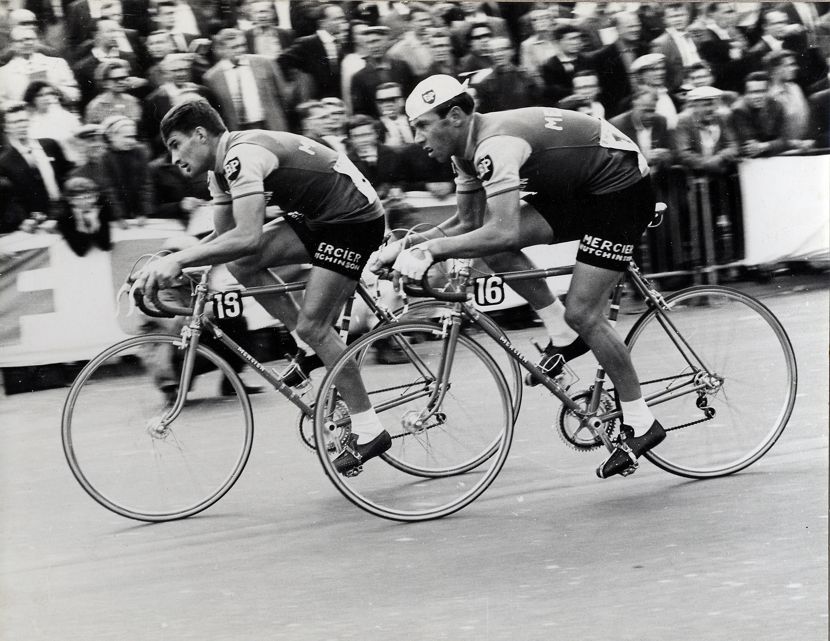 Raymond Poulidor (left) Barry Hoban (right)
I had a couple of good placing’s as well. I finished third in the final stage into Madrid and I was climbing well. But Franco’s Spain was pre-package tour Spain, there were no hotels of much significance away from the coast. The interior felt a bit daunting. I’d been to East Germany in 1959, but Spain in 1964 looked far more desperate than East Germany.

We finished one stage in the centre of Spain's coal mining area, and the town looked like we were going to Blaenau Ffestiniog in a thunder storm in the middle of the night, it was horrendous. We stayed in this apartment block with dingy, badly lit corridors. It was basic, basic; basic, like you found then in the Eastern bloc countries. Nothing like you get in Spain today. The food was particularly bad, not that it was all that good anywhere else back then. 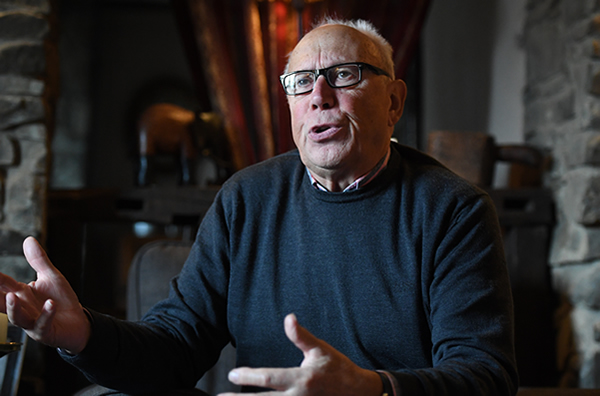 Diet never came into our lives very much, you ate what you got, and we ate a lot of carbohydrates. So we ate lots of rice, and sometimes the meat was a bit suspicious, so I just had a plate full of rice, and I'd get some eggs, soft boil them, take them out of the shell, chop them up and grate some cheese on top, and that would be my meal.

I also carried big bags of muesli around with me. I’ve ridden stage races on muesli and yoghurt after seeing what came out of the kitchen. But Spain was a bit behind everywhere else……………………………………

Back to Cycling Legends
So that was the Vuelta a España in 1964, or rather what Spain was like in the early years of the Spanish Miracle, which lasted from 1959 through the end of Franco’s rule in 1973, but was halted by an international oil crisis of 1974. It was a time when Spain’s economy and infrastructure changed, and once Franco had passed on the country changed socially and politically too.