The Hour Record; one rider, one bike, one gear riding around a velodrome as far as they can in 60 minutes, it’s the purest of cycling records, where speed meets endurance at the limits of human performance.

There have been three attempts by men at their World Hour Record this year, none of them successful, but the women’s Hour Record was broken on Thursday September 13th at the Aguascalientes Bicentenary Velodrome by Vittoria Bussi of Italy, and shortly afterwards she told www.cyclinglegends.co.uk how she did it. 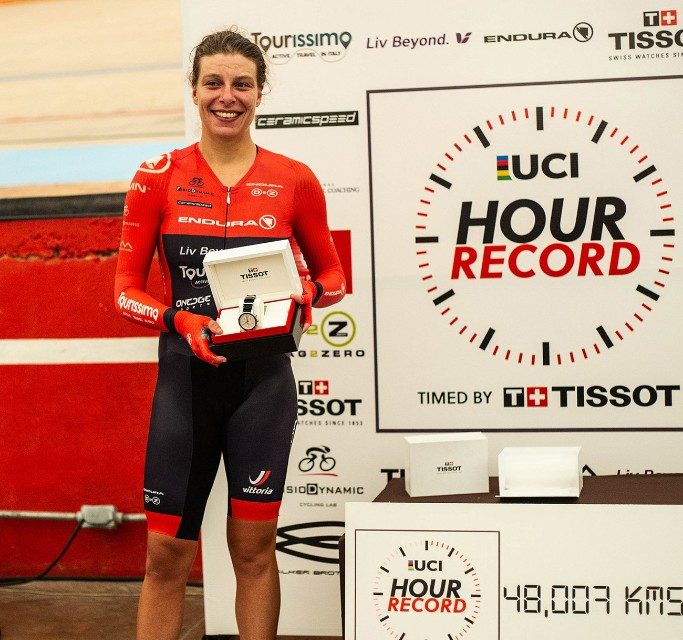 “My strategy was to start out exactly on record pace, then increase it as much as possible,” she opened, and it’s exactly what she did. In setting a new distance of 48.007 kilometres, beating the old record held by Evelyn Stevens of the US by a fraction over 20 metres, Bussi rode at 18.7 seconds per 250-metre lap for the early part of the ride, edging slightly ahead of record pace at 30 minutes, then gradually, ever so slightly, built on that in the final 15 minutes.

It was a record set with mathematical precision by a Maths PhD and it was done by the numbers, but numbers shouted from the track side. “My boyfriend shouted the times lap by lap. You have to ride faster than 48kph as you have to take into account the time lost at the start,” Bussi says.

Essentially, breaking any record is as simple as that. Once she got up to record pace, Bussi held it for a while, then slowly but surely went faster so she passed Evelyn Stevens’ record with just enough seconds left to break it. The margin was slight, but she was always in control and grew more confident as the hour and laps ticked by. 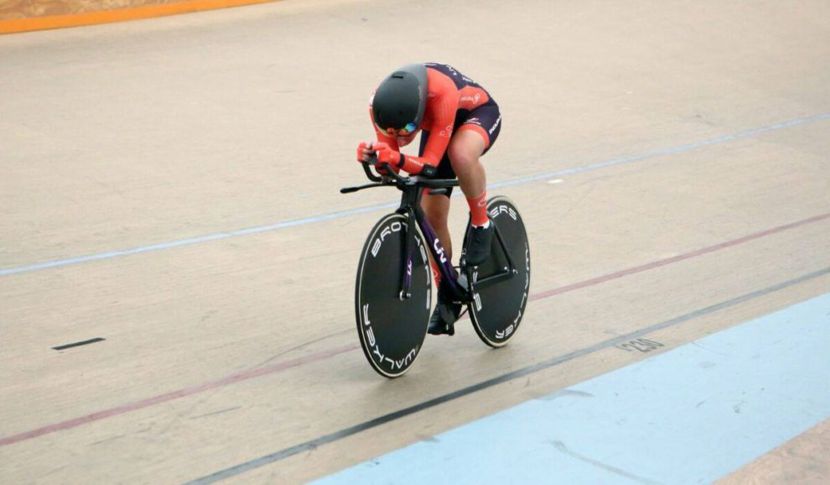 “The worst time was the first 20 minutes, because my legs were tired from the day before. I planned to go for the record on September 12th but there was bad weather. I decided with my coach not to start. Instead we decided to go the day after, but then the sun suddenly came out so we decided to start as planned.”

And start she did, but the air temperature was far from ideal, and after 40 minutes when she was off record pace and not feeling like she would get back, Bussi abandoned the attempt. “It was really stressful to change from not racing to a racing attitude. I had lost my concentration and I was slightly under expectation,” she observes.

September 12th is Graeme Obree’s birthday, which was maybe an omen because just as Obree did 25 years ago in Hamar, Norway, Vittoria Bussi went again next day, and this time, like Obree, she broke the record.

There are other parallels with Obree in Bussi’s approach. Although she has been a WorldTour rider, she isn’t now and her training has been focussed entirely on, and been specific too, the Hour Record. She is unwilling to reveal many details of her training, saying; “I want to keep my training secret, but I can say that when training I tried to remain as much as possible in my uncomfortable zone.” That was something Obree focussed on in brutal turbo trainer sessions. 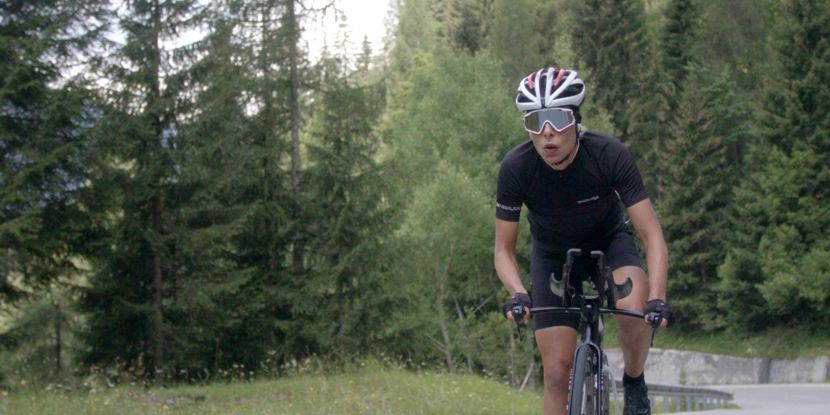 Also like Obree, Bussi isn’t a stickler for diets; “I hate them. I am not strict at all, I ate pizza before the attempt and a sandwich with ham after it. I avoid junk food normally, I think what you eat is important, but so is the joy of food. That plays an important part, remember I am Italian.”

However, Bussi used some cutting edge nutrition in her training and immediately before the record attempt. She is sponsored by the silicon-valley biotech company HVMN, which has developed the word’s first commercially available ketone ester drink. Ketone ester is used by the body to fuel the same exercise intensities as carbohydrate, but with less metabolic cost. Theoretically that means more oxygen can go to working muscles, and in a peer-approved experiment well-trained cyclists including some former Olympians rode on average 400 metres further in 30 minutes using HVMN ketone than those fuelled by carbohydrate and fat-based drinks. 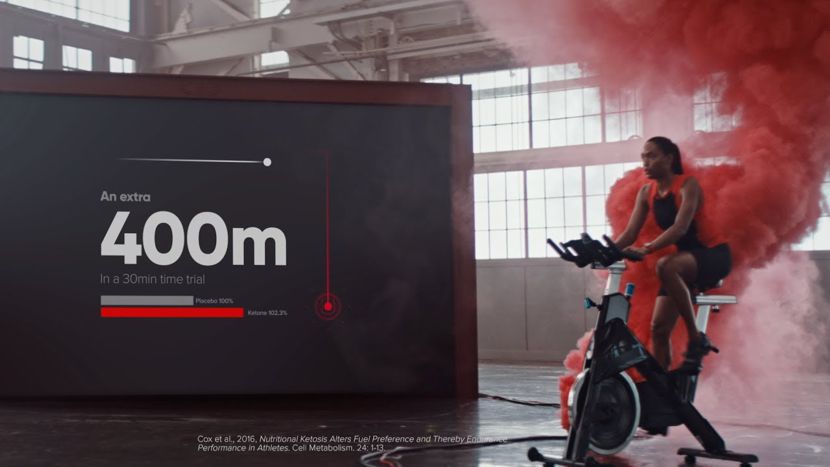 When Bussi tried to break Evelyn Stevens’ Hour Record in 2017 she was 400 metres short, which was still the second furthest distance ridden by a women under the current Hour Record rules. Given the above experiment quoted by HVMN, Bussi’s attempt this year was a perfect opportunity for the company to publicise their product.

Fuelled by HVMN’s ketone ester drink, Bussi rode 420 metres further than she did in 2017. “I drank a bottle and a half two hours before the record attempt. With my coach and Dr Stubbs we came up with the best protocol for me to use HVMN ketone, and it helped in the last part when I was able to increase my pace,” she says.

Summing up her record, after getting over the tiredness from the previous day Bussi says; “I felt better in the last 20 minutes when I started to believe the record was possible. I just had to find the right focus, and I did it by focussing on the music of my playlist. The velodrome was like a disco.” 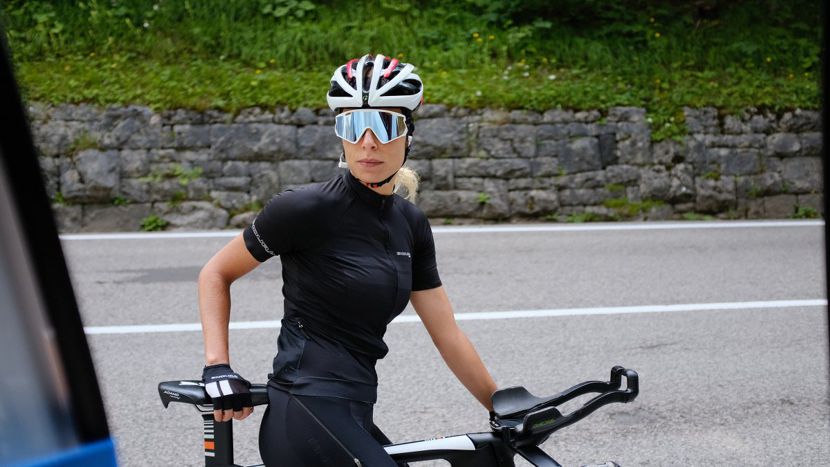