How the climber’s jersey got its spots

Words: Chris Sidwells
Photos: Cycling Legends and Offside
What a dashing figure Julian Alaphilippe cut as the 2018 Tour de France King of the Mountains. The Frenchman is the very essence of a climber, his whippet-quick body capable of searing death of glory attacks. Climbers like Alaphilippe are drama in a dramatic landscape, all fight, fury and passion. They even turned a quirky jersey design into an icon of the sport. 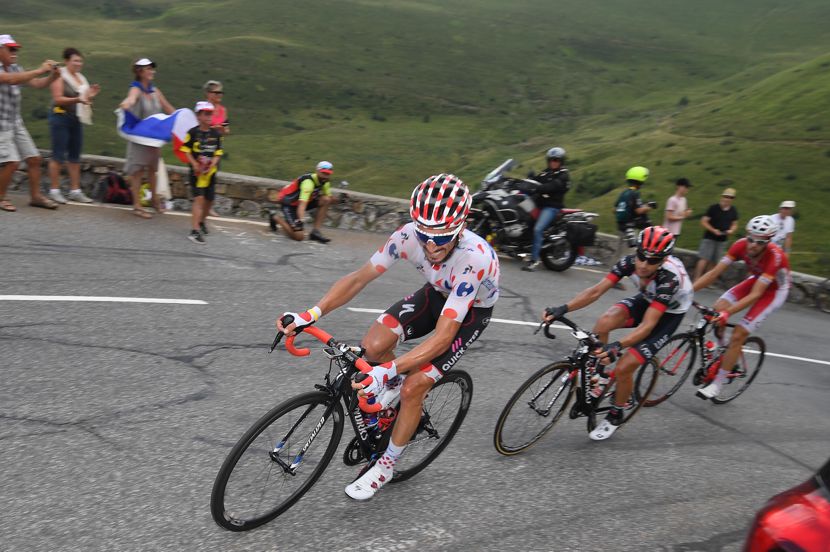 The polka-dot jersey, white with red spots, first appeared in the 1975 Tour de France. The reason for its design is widely accepted as mimicking a wrapper used by its first sponsor, Chocolat Poulain, which was white with red polka dots all over it; only……………….

Only the first man to win the polka-dot jersey, Lucien Van Impe says; “As far as I remember the jersey design was Félix Lévitan’s idea.”

Félix Lévitan was Tour director from 1962 to 1986, for most of the time running it with Jacques Goddet who looked after the technical side, while Lévitan took care of business. They both treated the Tour as their personal fiefdom. Their word was law; they would overrule race commissaires, impose their own fines, and bring in new rules on a whim.

But Lévitan and Goddet are a story for another day. Barry Hoban rode the 1975 Tour de France, his team-mate Joop Zoetemelk was the first rider to ever wear the polka-dots, and he confirms what Van Impe says; “It was Lévitan’s idea to have a mountains jersey and he came up with the polka-dot design.”

Interesting, Chocolat Poulain has been taken over several times, a direct line of enquiry brought nothing, so I put ‘Chocolat Poulain’ in a search engine along with the words ‘polka dot wrapper’ and………nothing, again. Loads of photos of Poulain packaging through the ages, but none with polka-dots on, never mind red ones.

What I did find though was there’s a Chocolate Wrapper Museum. It has tens of thousands of exhibits including many Poulain wrappers, but nothing with red polka-dots. Here’s a link to the Poulain page;
So if it wasn’t from a chocolate wrapper, where did the polka-dots come from? Let’s go back to Félix Lévitan and consider how he might have come up with the design. Levitan was born and grew up in Paris and was a journalist before and during his time as Tour director. Before that he’d been an enthusiastic cyclist who enjoyed watching races at the two most famous Paris tracks, the outdoor Parc de Princes and the indoor Velodrome d’Hiver. And that’s where he could have seen the polka-dot design.

Why do I say that? Well courtesy of an American friend, Peter Dreesens here’s are a couple of photos of a regular racer on both tracks at around the time Levitan was a young spectator, Henri Lemoine, who was a six-time French motor-paced champion. 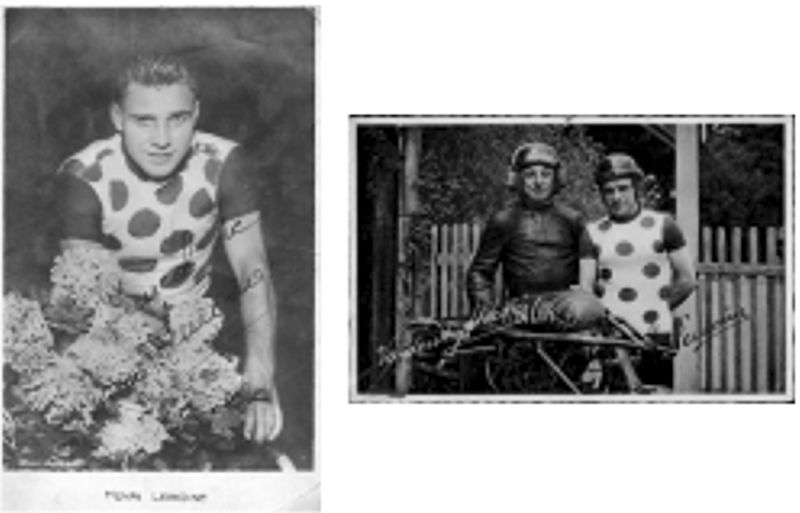 Then here’s another from the same era, we believe taken at one of the Paris six-day races, which were held in the Velodrome d’Hiver. 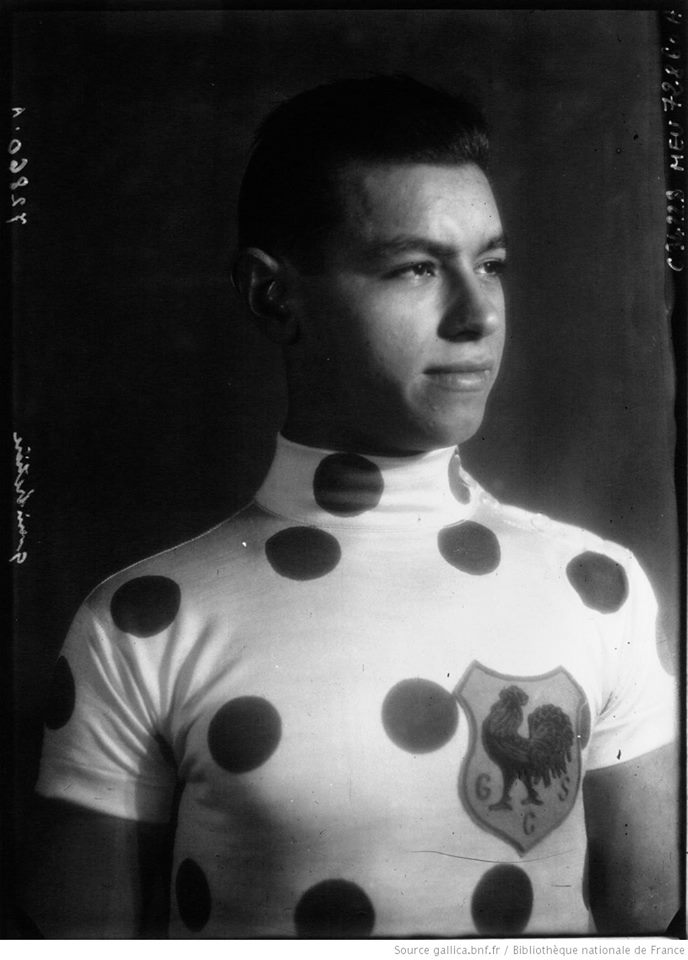 Not convinced? How about this colour sketch of some very early 20th century track racing in Paris. I think this is quite compelling. 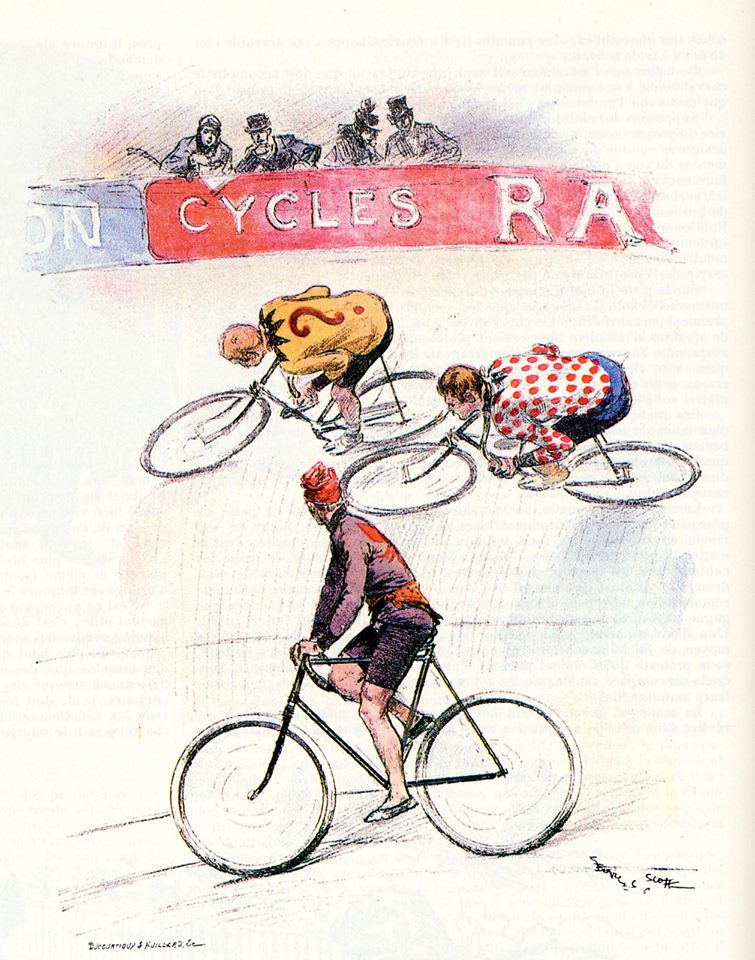 That is how I believe the Tour de France King of the Mountains jersey got its spots, from copying a jersey popular with track racers in the 1910s, 20s and ‘30s, and not from a chocolate wrapper, although I might be wrong. If you’ve got a polka-dot Poulain chocolate wrapper then let us know.